J. C. Darr lead a wagon train from Lincolnton, North Carolina to Huntsville, Arkansas. Below is a link to his journey diary. I am not certain that Elias Wagner Plott was on this journey; however, the journal is enjoyable to read to the life and times of families moving from North Carolina to Arkansas. Within Darr's journal writings, please notice the weather, miles traveled, Sabbath observance, persons in slavery versus the State of Illinois, and humor during the journey. I am thankful for our modern air conditioned and heated cars, freedom from slavery, and sanitary butter production.
"14th Nov (1858). Sabbath day, part of our company violated our agreement made at the beginning of our journey, not to travel on Sunday, and left camp, but part of them came back after a drive of a few miles and persuaded those who remained to move up to the camp they had selected. The others moved on, the women said that they were possessed of the devil. How far they moved that Sabbath we did not know and care less, as this little bunch of our company were trying all the trip to control all the balance of our company. We moved up four miles and camped with those who came back after us. Cloudy, threatening rain."
Like you, I have much regret of slavery in our U.S. history; however, it was a fact and we strive to learn from the wrongs. In J. C. Darr's diary, he did not list names of the families, who owned persons in slavery. However, J. C. Darr wrote that persons in slavery were included in the wagon train. I highlight the following paragraph for you to read a first-hand account of how slave owners' actions and the wagon train route was altered to retain persons in slavery from the then slave-free State of Illinois. The following is a quote written by J. C. Darr, "03rd Nov (1858). Cloudy and cold continued our journey as usual. As a few of our families had negro slaves which they owned at that time, and learning that the Illinoians were stealing all slaves and liberating them, Illinois being a free state. Most of the company changed the route intended, and took the road to Iron Banks (as then named) on the Mississippi river, (now Columbus); moved 6 miles, broke down a wagon and camped for repair. Roads are very muddy, and still raining."
I find that J. C. Darr had a sense of humor, as he wrote his account of butter, "24th Nov (1858). Leave our camp in Howells valley which is a fine prairie country in Oregan county Mo., moving one and one half miles we take the road leading to Yellville, Ark., our way leading over prairie and barren plains, passing many good settlements on the praries. I must state here that I was a sort of a handy boy to look up something to eat, and tramped ahead with my gun frequently, I would be requested to look out for various things to eat, this time it was butter. I soon found a place where I could get all I wanted if I could wait until the housewife could churn, which I agreed to do. I heard the lady chasing the pigs back of the house. I looked around there and I saw that she was chasing the pigs out of a large wooden churn, had it been a stone one I think I could have stomached it, but not a wooden one. As it was a hurry job I told the lady I was in a hurry, I would describe the company and if she got the butter ready to just stop them and sell the butter to any one wanting to purchase and I would move on. Knowing well that my folks would not buy as thy left that to me. In camp that night one of our ladies balled out that if any one wanted butter she would divide out her stock.She described the place to me and I knew at once that she got her butter where the pigs were chased out of the churn. But I would take none of it which they thought strange as they knew I was fond of butter. I gave no reason I would not take any only there would not be enough to go round to all. After the butter had all disappeared I let out my secret. If you ever saw a mad crowd of women that was the madest, one of my aunts said she never would forgive me. We go into camp having traveled 18 miles." I suppose if I had eaten butter, which pigs had had there nose into the wooden churn, I would be upset as well. Haha . . .
Click on the below green button to open, read, save and/or print or HERE.
Darr's Wagon Train Journal 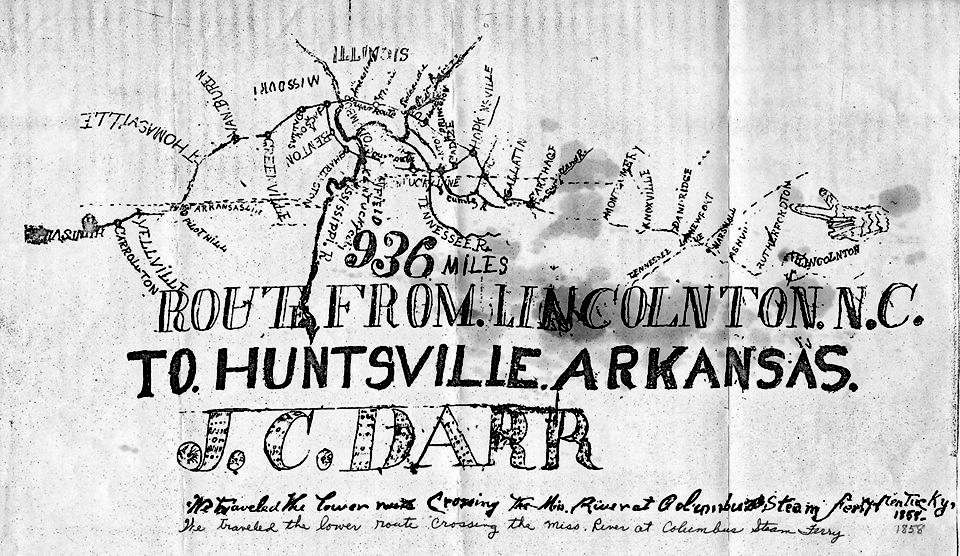 J. C. Darr's Wagon Train Map - It coincides with towns mentioned in Darr's Wagon Train Journal.
Did Daniel Plott, son of George and Margaret Plott, travel to Arkansas on J. C. Darr's 1858 wagon train? NO! I have heard stories retold that Daniel Plott was included with this 1858 wagon train and that Elias Wagner Plott took Daniel Plott to Arkansas. This is completely wrong! Daniel Plott, son of George and Margaret Plott, had been in western Tennessee, Missouri and Arkansas since about 1808+-; plus, Daniel died about 1848 some ten years before this wagon train travel. Instead of Daniel's nephews encouraging him to move to Arkansas, the fact is that Daniel encouraged his nephews to move to Arkansas. The following were nephews of Daniel that moved to Arkansas after he had been settled there for many years. John Jarrett, William Jarrett and Anthony Jarrett were Sophia's sons. Sophia was Daniel's sister. Elias Wagner Plott was Elias' son. Elias was Daniel's brother. Elias' son Philip A./O. Plott was stationed in Arkansas/Missouri during the Civil War. Elias H. Plott and George M. Plott were Isaac's sons. Isaac was Daniel's brother. Isaac's son, Daniel Plott (married Leah Shank) moved to Tennessee.