Let's discuss George's name. To this date, with documentation, we can factually say that his name was "George Plott". Although since the 1920s, the name “Johannes George” has been used for George. Even though another man, "Johannes Schlott", signed his name as "Johannes" on a 1750 Oath of Abjuration in Philadelphia, we don’t want to completely set aside the use of "Johannes" as George’s first name; however, technically, George never used it with any of the documents currently found as of today’s date. We only used it because we were told from the 1920s that "Johannes Schlott" was "George Plott". We have now found this information to be inaccurate. There were two completely different men. However, let's consider George's roots for a minute. He came from Germany after the Reformation; ergo, it is logical to accept that George would have been dutifully raised in the Lutheran church, followed Lutheran traditions and followed Lutheran sacraments, such as being baptized as an infant. With most Christian denominations, during a baptism and its blessing, the person's full name is announced. Within different Lutheran communities, then and now, naming the child can have a whole meaning and/or connection to one's heritage and beliefs. Lutherans have Sponsors also known as Godparents, who promise during the baptism that they will watch over and pray for the child's Christian faith, Christian upbringing and Christian education. To honor the Sponsors and to provide a recorded connection to whom the child's Sponsors are/were, the child's name may include the Sponsor's name or names, depending upon the number of Sponsors. Here is another reason to when or how a child may have three, four or five names long. These Sponsors could be extended family members or close friends of the family.

After the Reformation, many German Lutherans held onto the belief in Saints awarded within the Catholic church. Ergo, some Lutheran parents would continue to select a Saint to watch over or bless their baby. The Saint's name would be used in the child's name; such as, St. John. Catholics use latin in their studies and services, so St. John in latin is Sanctus loannes or Saint Johannes. Many times the Saint's name would take the first position in the child's name giving important status to the Saint. The child's second name would be their common or called-by name like “George”, then the family surname like “Plott”. So, there is a possibility that his name was “Johannes George Plott”. Also, there is a tradition that once the man marries he drops the Johannes youthful name and matures to only use his called name; in this case George. So, if George and Margaret married in 1763, he could have dropped the Johannes; thus, we would not see records of him using Johannes on his documentation. However, we only have documentation that George used his name, "George", even while he was single. On the 1757 to 1765 Berks County, Pennsylvania taxable lists, which the 1757 to 1762-ish he was listed as single using the name George. 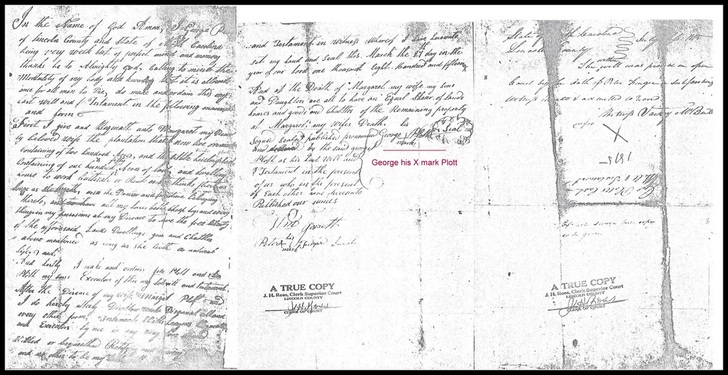 Last Will and Testament of George Plott
Recently, I have seen several websites referring to George as Jonathon, Jorgen or folks incorrectly suggesting that George anglicized the spelling of Johannes to Jonathon. Let’s review again George’s German Lutheran Christian beginnings and pull out our Bible. The beginning books of the New Testament are: Matthew, Mark, Luke and “John”, not Jonathon. Johannes is a variant of John. Remember, the above explanation, St. John in latin is Sanctus loannes or Saint Johannes. Never did George, Margaret or their nine children use Jonathon with any of his documents. Here is a quote from his Last Will and Testament, “In the Name of God Amen, I George Plott of Lincoln County and the State of North Carolina being very weak, but of perfect mind and memory thanks be to Almighty God, ...“ Thank goodness George refers to himself with a ‘perfect mind and memory’. The man can remember his own name. His name was George Plott until documentation is found and/or released. Furthermore, the websites (including the Plott Hound online sources) and other venues (including North Carolina online) with erroneous information, using Jonathon or Jorgen Plott, need to be corrected. The fact is that, George refers to himself as “George Plott”; thus, it is accurate and respectful to call him, refer to him, write about him or document him as “George Plott”, as he himself authorized it in his official documentation of land deeds, land grants, land surveys, a petition, federal census, merchant records and his Last Will & Testament. Furthermore, his children acknowledge their father as George Plott all throughout the settlement of George and Margaret's estates. The typical living person does not like to be referred by an incorrect name, so I ask, “why would we continue referring to a deceased person with an incorrect name, if we know their correct name?” Dead or alive, it is an insult. (Yep, I wrote/said insult.) 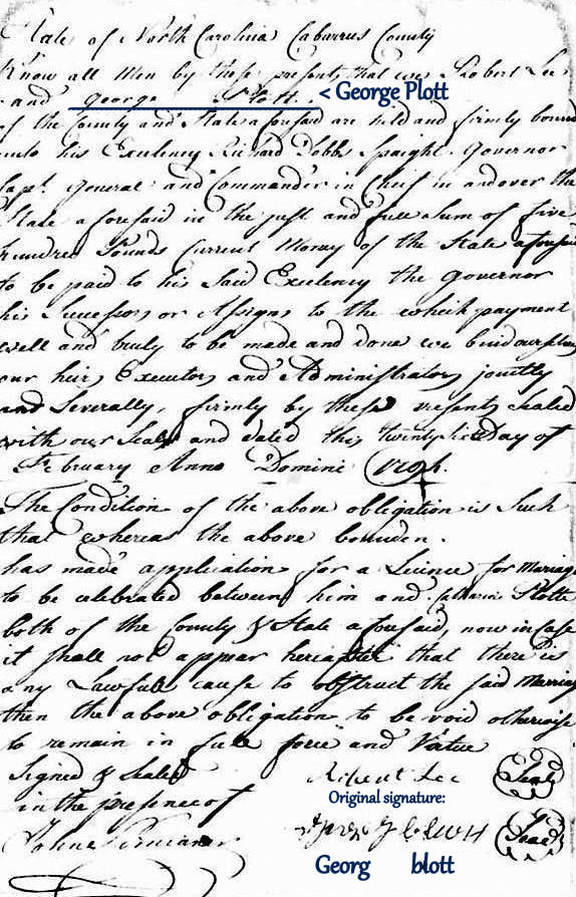 George Plott signed his daughter, Catherine Plott's, marriage bond to her first husband, Robert Lee. He used his German script, which looks as "Georg blott". We have to 'go back in time 276 years ago'. We cannot use or insist upon using our current 'English-American' writing or phonics standards and expect to find our accurate and total Plott Family History.
On February 26, 1794, George Plott signed his daughter's, Catherine Plott's, marriage bond to her first husband, Robert Lee. George's signature was original to the document. He signed "Georg blott". Wait a minute! "blott!" What is with the "b" for Plott? Greatx grandfather George Plott gave us a German writing and phonics lesson from over 276 years ago. When he was a young boy, he was taught how to write his surname, which appears as 'blott/blatt'. The "P" and "b" German script are interchangeable in lower southern Germany, for which, the Plott family came.

The Plott family arrived in America from Germany on September 23, 1741 on the Ship Marlborough, Master (Captain) Thomas Bell. In 1741, George's father, Görg Plott, was documented as released from his Lord's rule on a manumission in Meißenheim, Germany. George with his parents, Johann Görg Plott and Phillipina (Unknown maiden name) with his siblings Margaret, Frederick and Jacob came from the Callbach, Meißenheim region of Germany. George's youngest brother, Adam, was born in Pennsylvania.

We have to learn the writing and phonics lessons that greatx grandpa George was taught while he was a young boy for us to research, find, decipher, comprehend and accept the factual documents. We have to 'go back in time 276 years ago'. We cannot use or insist upon using our current 'English-American' writing or phonics standards and expect to find our accurate and total Plott Family History. This 'going back in time' research rule goes with any ethnic family research; Scottish, Irish, Welsh, French, British English, Polish, Russian, etc.

For our German Plott family, we have to learn the old German Lutheran and Catholic traditions. Even our current American Lutheran and Catholic churches have changed from 276 years ago. We have to learn the old ways of how the churches conducted business, records, etc. We cannot use our modern church systems (Lutheran, Catholic, Baptist, Presbyterian, Church of God, Methodist, Anglican, Episcopalian, etc.) and expect to find genealogy research results.

We have to learn the ways of Early American Colonial times in the Pennsylvania area from 1741 to when George and Margaret moved to North Carolina in about 1767-ish. We have to learn how the government records were kept during the time period. We have to find the local Lutheran and/or Reformed churches to verify if records were kept and/or still exist. We have to find out who was the minister at the time to research if he kept records and/or if the records still exist.

Even when James Iverson Plott and Grace Plott first started working on the Plott Family history back in the 1920s, they did so approximately 190 years after the Plott Family came to America and 116 years after George’s death. We know that as years passed new generations with their day-to-day lives forget or were not told about the details of previous generations; especially, if the previous generations did not have a lot of paper and pencils to journal their lives or had poor writing and spelling skills to attempt to journal their lives or records were accidentally destroyed by fire, floods, stashed away on a shelf to be forgotten, Civil War, etc. In the 1920s, James and Grace were the new generations. Although James was older than Grace, he endured the Civil War and being a prisoner during it. Grace tried very hard to research the Plott family history; however, she also worked as a nurse and had job responsibilities. Plus, she was killed in a hit-and-run car accident at the age of 40 years old. I am expressing how facts and details could have gotten mistold. Our previous generations did the best that they could do for the circumstances that they lived. We have to look at the facts and documentation from the time of George and Margaret Plott and their nine children were alive. Modern technology is allowing us to find these old documents and fact to better align our Plott Family History with those forgotten details.

George Plott, Henry Plott, Jonathon Osborn and Jonathon Plott - "Four Individual Men"
The Plott family, like many other families, repeated certain names from generation to generation. With the repeated use of the male names George, John and Jonathon I tend to consider that Plott storytellers in the early 1900s got "tongue twisted" (meaning "confused") while speaking about three particular family members: Johannes George Plott (the Plott family patriarch), Jonathon Plott (son of Henry Plott and Lydia Osborn-Plott), and Jonathon Osborn (brother to Lydia Osborn-Plott). A long list of male heirs, from the late 1700’s to the late 1800’s, can be found with the names George, Henry, Elias, John and Jonathon. It is difficult enough to keep all the descendants organized using a computer, so I understand that pre-computer technology, the effort was mind boggling; innocent mistakes. Please note that I shall not call out past or present names of persons, who used or use the Jonathon name for George. It is not my style to embarrass anyone; however, with our modern ease of accessibility to archives, online digital files, online sources, emails, microfilm, etc., we know better than to repeat the mistake. Please stop using Jonathon or Jorgen for George Plott. The online sources need to be corrected.

Who was the first Jonathon within the Plott Family? George and Margaret’s son Henry Plott married Lydia Osborn. One of Lydia’s brothers was Jonathon Osborn. Jonathon Osborn was recorded on the 1810 Haywood County, N.C. census. By 1810 Henry and Lydia moved to Haywood County, N.C. as well. Henry and Lydia (Osborn) Plott named some of their children after her Osborn family member. Henry and Lydia named their first son after her maiden name, Osborn Plott; and named their fifth child after Lydia’s aforementioned brother, Jonathon. The name “Jonathon” was an Osborn family name and the use of Jonathon entered the Plott family when Jonathon Plott was born in 1805. 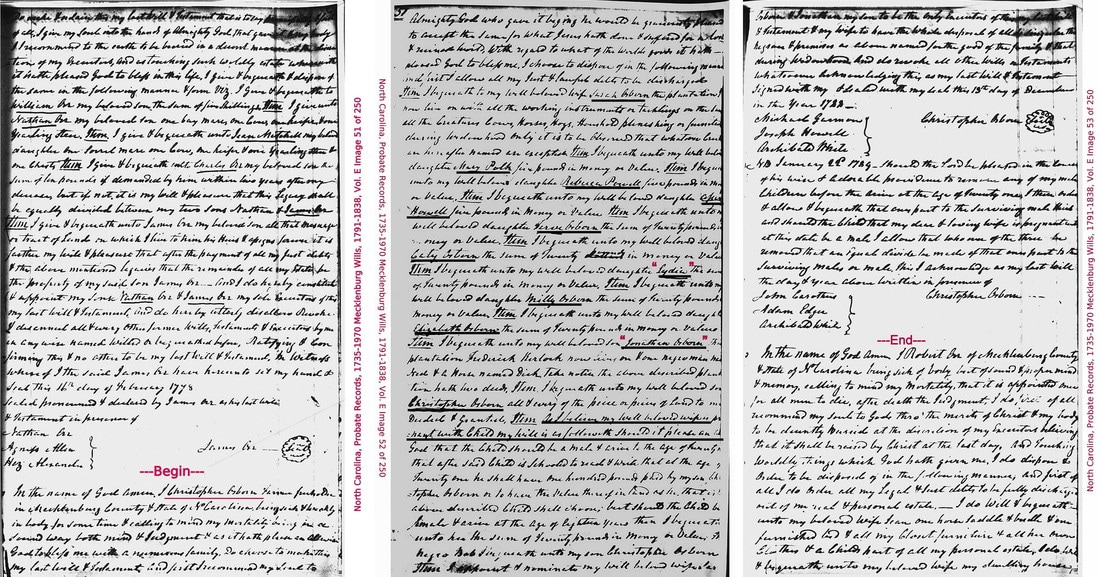 Last Will and Testament of Christopher Osborn, father of Henry Plott's wife Lydia Osborn and to Lydia's brother Jonathon Osborn. In Christopher Osborn's Last Will and Testament, he names his children including Lydia and Jonathon. The name Jonathon was an Osborn family name brought into the Plott family by Henry Plott marrying Lydia Osborn; thus, gaining a brother-in-law Jonathon.