The Plott Family came to America on the Ship Marlborough, Master Thomas Bell on September 23, 1741. Father Görg Plott, Mother Phillipina, Daughter Margaret, Son Frederick, Son George age 5-6-7 years old, Son Jacob and a Son was to have died at sea. The name of the son that was to have died at sea is unknown.

​Ship Marlborough, Qualified September 23, 1741 - Master Thomas Bell. Ship lists 82A, B & C. It is believed that the ship's clerk wrote in error Garret Plott for Görg Plott, who would be George Plott (Sr.), the father to George Plott (Jr.). There are several errors on name spellings on the List 82A. If the male over age of 16 years old was able to sign his name, he signed on Lists 82B & C. The spellings will vary from List 82A. George Plott (Sr.) did not sign Lists 82B & C. I pause here to further explain information provided to me by Gregory Thomas Little, a descendent of Mary Plott and John Campbell, "... that final "g" in Görg would have sounded like a "k," when pronounced correctly. Perhaps the English speaker thought he heard a "t." (?)”. I appreciate Gregory’s German lesson. Finding our German roots requires us to include and accept German language and customs of 1700s. So, Görg pronounced Görk in a thick German accent could have sounded like Garret.

My mind considers, why did George Plott, Sr. not sign the oaths . . . because a son died on the voyage to America, . . . was George, Sr. sick, . . . was he tending to the Plott hounds, . . . and as the Plott family had young children, was George, Sr. helping Phillipina (supposed to be his wife from a baptism sponsor record) with the children? George Jr. would have been about five years old.

I asked the Pennsylvania Historical and Museum Commision if there was a cargo list for the Ship Marlborough. Their response was, "There are no cargo lists for this ship in our collection." Remember, a good historian always asks a question, even though we are doubtful in an answer. 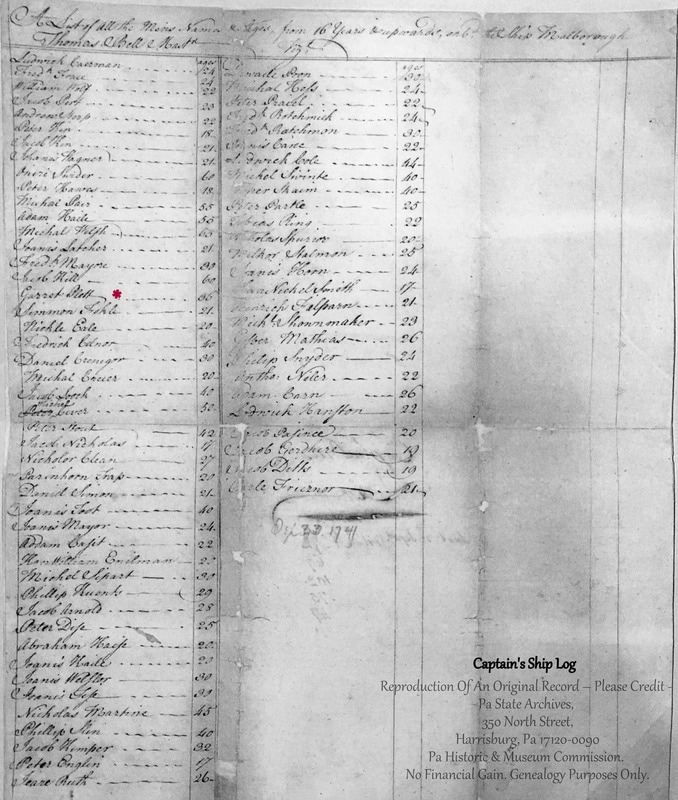 The ship's clerk made many spelling error on the names listed on the ship's log. It is believed that Garret Plott should be Görg Plott. 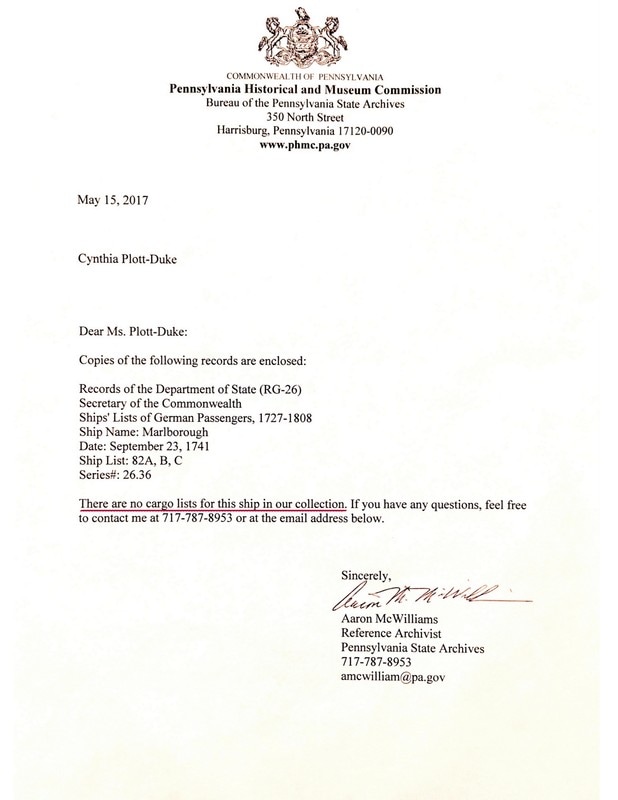 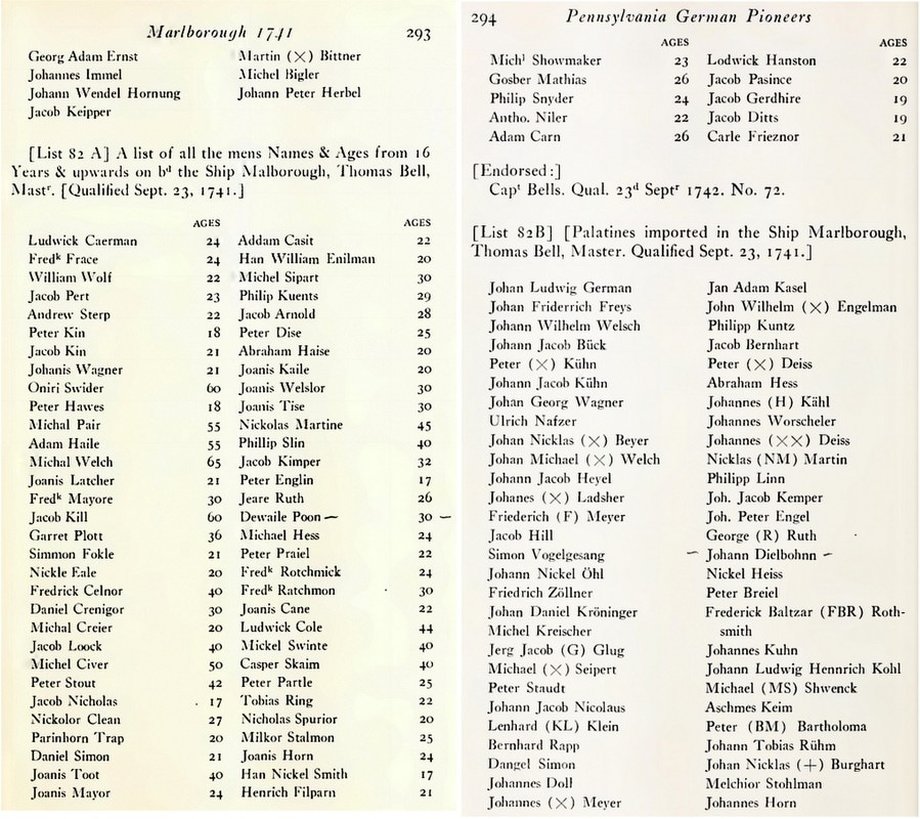 PENNSYLVANIA GERMAN PIONEERS BY RALPH BEAVER STRASSBURGER, LL.D. EDITED BY WILLIAM JOHN HINKE, Ph.D., D.D. On List 82 A George's father was listed as Garret Plott. Unfortunately, the ship's scriber misspelled several names. The given name should be Görg not Garret. Görg Plott did not sign the two oaths, which are Lists 82 B and C. 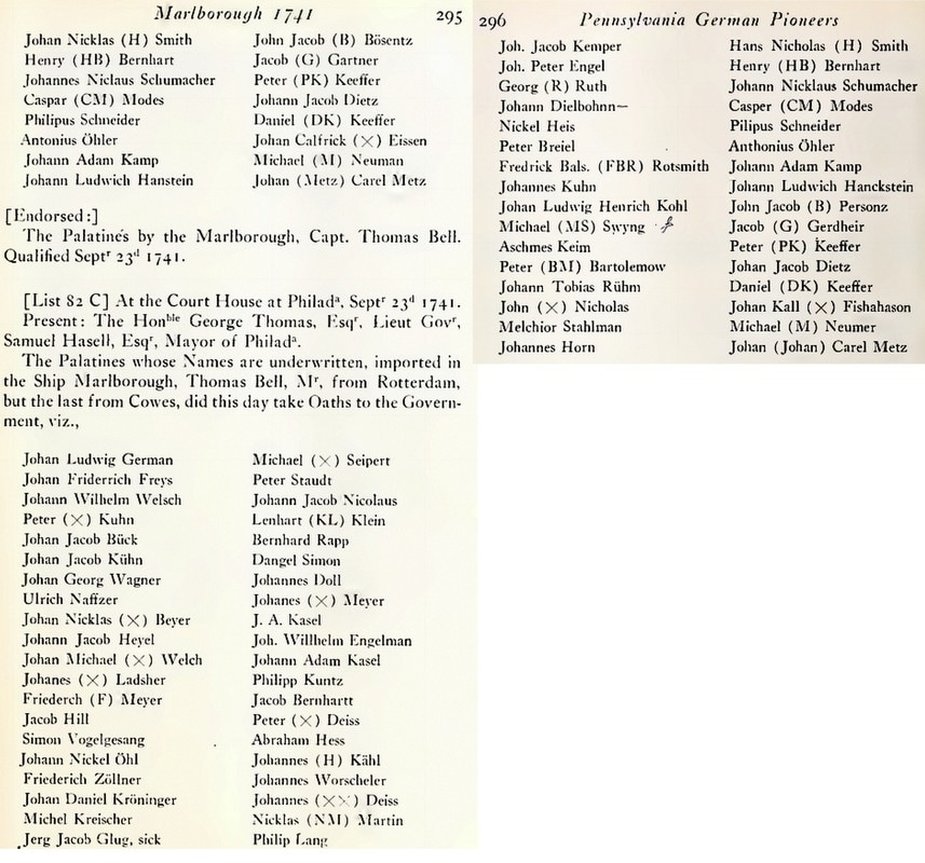